While ample space is generally considered a good thing, too much of it across a wall can evoke a sense of emptiness. Overcompensating with too many pictures, mirrors and decorations can create a cluttered effect. Read on to discover ways to let paint to do the work so that you can minimise other elements.

Using Colours To Fill The Void

A rich mid-tone or dark shade covering the wall is the first step to a friendlier feel. Don't stick with a pale blue or green—colours which tend to recede— and don't use or cream or white. Instead, pick rich greige, deep green or striking charcoal, for instance. The strong colours will seem to fill up the wall with something definite rather than forming a nondescript background.

Incorporating Contrast To Break Up Space

Find ways to incorporate variation onto the wall using paint. For instance, contrast the wall with the ceiling, skirting boards, window frames and door frames. This will add visual interest and visually break up the area, which will make it feel less expansive. With mid-toned or dark walls, white and cream trimmings will pop.

Why not turn the walls into art using faux painting techniques? Sponge painting generates an attractively textured mottled surface. Using two similar tones will keep the effect subtle. You could mix two shades of a tan terracotta, for example. Contractors use sponges to remove or add the glaze to achieve an attractive balance between two shades.

Another approach is to visually draw the ceiling downwards, which will reduce the expanse of the wall. Painting the ceiling a deeper colour than the walls will make it feel closer and thus lower—and it will also incorporate extra contrast into the paintwork. To create the illusion of an even closer ceiling, continue the ceiling colour on the cornices or across an upper band of the wall.

While pictures and decorative items beautify your home—with darker walls, you won't need to be excessive in your decorations. Deeper hues, particularly warm ones, will dominate the wall rather than disappear. Take the opportunity to add contrast where you can, against trimmings and architraves, to emphasise these architectural elements and break up the expanse. Faux finishes such as sponge painting can become attractive artistic flourishes in themselves, filling the surface with soft texture and detail. Ask your painters for other ways to deal with large wall areas. 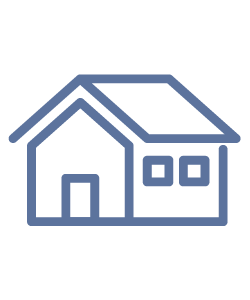 Redecorating your home doesn't have to be a chore. With the right skills and information, you can enjoy every moment as you transform your home. The aim of this site is to provide you with lots of really useful info which will help you to paint your home and wallpaper the walls. While I'm not a pro decorator, I have developed my knowledge from watching numerous YouTube vids and reading online tutorials. This blog is a place where I plan to share all of my painting and decorating secrets so make sure you check back on a regular basis for my latest advice.

It is easier to get away with substandard indoor p …

The moment the exterior of your house starts to lo …

Have you been wondering if you need to update the …

As important as the bathroom is, it may be small a …